With seven successful Melbourne Sea Slug Census events to date, our records of sea slug species found in Victorian coastal waters are continuing to grow. Collecting photos of sea slugs present at different times throughout the year will enable us to monitor these species and track any changes, but we’ll need your help!

The seventh Melbourne Sea Slug Census was held between Friday 13 and Monday 16 March. We are currently working through the photos that were submitted. There may be a delay on reporting for the March Census due to disruptions caused by the COVID-19 pandemic, we thank you for your patience. In the meantime you can view all our previous reports below.


With many areas along the coast again subject to stage 3 restrictions, we sadly needed to cancel the winter Sea Slug Census planned for 10-13 July. More information about current restrictions can be accessed at the Victorian health department page.


Search your slug shots while staying at home

We’re hosting a stay-at-home friendly alternative to the Sea Slug Census that everyone can participate in: a Southern Sea Slugs Photo Competition. This way you can “hunt” for nudis from your own couch and help us celebrate these beautiful, quirky creatures without leaving the house!
We’re asking people to comb through their photo library and put forth their best photo, something that captures how spectacular our southern sea slugs really are.

The best photo and 2 runners up will receive a selection of sea slug art and goodies to brighten up their homes- let’s face it, a lot of us need a bit of colour in our lives right now, and nudis are perfect for that. First prize includes a framed, canvas print of Ersnt Haeckel’s Art Forms in Nature- Nudibranchia.

What to do
Just send in your favourite and most fabulous shot of a Victorian species of nudibranch or other sea slug* to be in the running for a prize. Photos will be judged by a guest judge.

To enter, please send your photo to [email protected] with the title “Southern Sea Slug Photo comp”. If you choose to enter this competition you accept that the Victorian National Parks Association can:

*For the purpose of judging this competition ”sea slug” refers to any mollusc traditionally belonging to the Nudibranchs, Pleurobranchs, Cephalaspids (headshield slugs/bubble shells), Anaspids (sea hares), Sacoglossans (sap-sucking slugs) or Acteonids (also bubble shells). In this case, as has been the case with our Sea Slug Census records, we will also accept photos of Onchidellas and Velutinids.

In Partnership with the Melbourne Sea Slug Census:-

The Sea Slug Census is supported by the Victorian Government.

Discover a world beneath the waves

What is a sea slug and how will you know if you’ve found one?

Sea slugs are actually snails i.e. they are sea snails (marine gastropod molluscs) that have seemingly lost their shells. Also known as nudibranchs, they are found in most marine habitats, occurring in shallow rock pools and in the deep sea. Knowing when you find one can be easy when they are the size of a football, or extremely difficult when they are smaller than the nail on your pinkie finger. Generally, if it is in saltwater and it moves like a slug it is most likely a ‘sea slug’. If you are unsure, take a photo and we will let you know.

Sea Slugs are one of the most popular and most photographed groups of marine invertebrates, with ~400 species known in Victoria. They are excellent indicators of environmental change because they have rapid life-cycles (less than 12 months), very specific food requirements, and respond to changing oceanographic conditions.

Yet there is very little basic knowledge on their diversity, distribution and ecology. To learn more about them we teamed up with Southern Cross University to have Victoriaís first Sea Slug Census in Port Phillip Bay, Westernport Bay and surrounds. The information gathered will help marine scientists to update knowledge about the diversity and distribution of this spectacular group of molluscs.

To learn more about sea slugs in Victoria, check out these links:

With many areas along the coast again subject to stage 3 restrictions, we sadly need to cancel the winter Sea Slug Census planned for 10-13 July. More information about current restrictions can be accessed at the Victorian health department page, Parks Victoria, and Park and Forest closures (includes notices of beach closures)

Instead of the June Census, we are hosting a stay-at-home friendly Southern Sea Slugs photo competition that everyone can be involved in. See above for details, or download the rules here.

To help our experts with their identification, try to get a clear shot of the slug’s body from the side and/or include as many creature features (rhinophores, gills/cerata, oral tentacles) as possible. As always when out and about in nature, be mindful of limiting your impact on your subject and their surrounds. 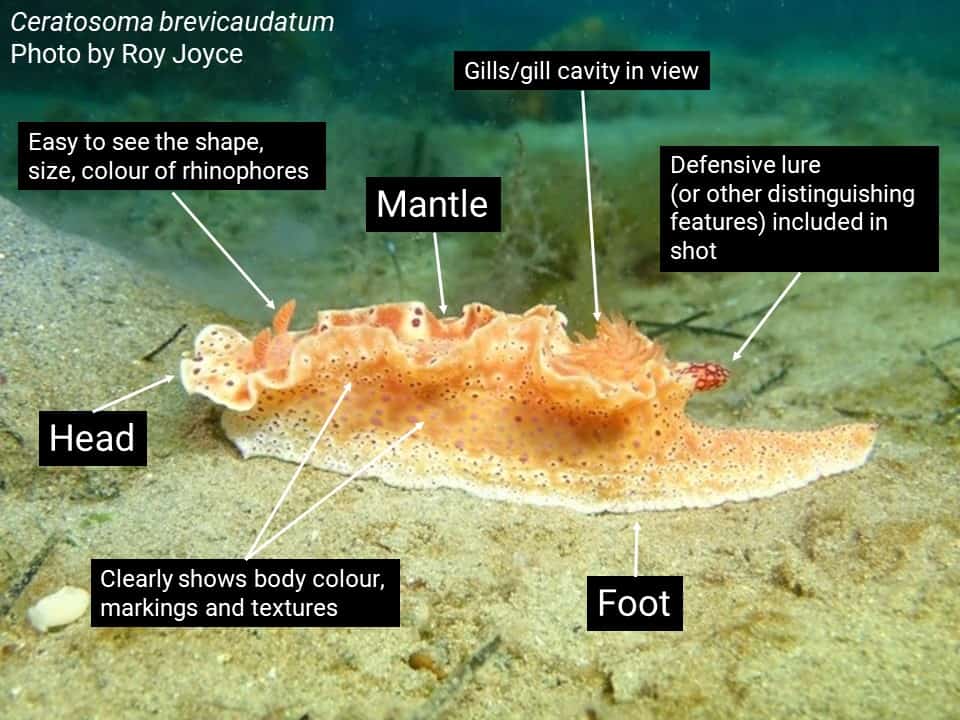 A note on water quality:

Results and report to come- watch this space.

Between Friday 17 – Monday 20 January 2020 18 individuals or teams submitted their photos of nudibranchs and other sea slugs as part of the sixth Melbourne Sea Slug Census.

72 species of slug were seen this time, a fantastic effort despite challenging conditions in many parts of the state. We received photos from usual hotspots like Blairgowrie and Point Lonsdale, as well as some more additions from outside Port Phillip Bay, including Eagle Rock Marine Sanctuary, Kilarney Beach and Peasoup near Port Fairy.

Our first true summer Census yielded some great finds, including several species that our experts at Museum Victoria and Southern Cross Uni were unable to identify. We also had some new additions to our records of species known to occur in Victoria that had yet to appear in any of the five previous Censuses. It shows the that holding regular Census events can help us track seasonal differences in the presence of these relatively short lived and mysterious animals.

And now for the prize winners!


Awarded by Bob Burn, who loved how this photo captured the animal’s amazing camouflage abilities, as you can clearly see how it mimics not only the colour and shape of its food source (Darwinella rosea, also featuring in the shot) but the texture as well.

Bob’s pick for runner up was Nick Shaw’s Roburnella wilsoni– a stunning shot of this small sacoglossan, showing off its thin shell and intricate features in fine detail. 
This specimen was so striking in how it was devoid of any identifying colours, marks or features, and may well be a new species. Bob was also impressed with Nick’s photo of Dendronotus sp. RB2- again a rarely spotted and rather unusual looking slug, but one that already took out this category in October 2018’s Census!

Honourable mention goes to Rebecca Lloyd’s Eubranchus sp., which again was one that stumped our experts. It’s incredible that our citizen scientist divers and snorkelers are finding slugs that could very well be entirely new species, and highlights the importance of the Census in making sure that these sightings are being sent through to taxonomists and researchers to help expand on our collective knowledge of this group of molluscs. Portrait of a Nudibranch: Ian Scholey


Our very first feature creature, Tambja verconis, up close and personal in this beautiful shot and showing its extra sensory organs (the blue, eye-like spots below the rhinophores).


Corrine and Ken didn’t let a dead camera battery stop them from submitting to the Census! They cleverly screenshotted some go pro footage and sent through the original video for verification. It was a good thing they did, as it’s the first time the sand-dwelling aeolid Cerberilla incola was recorded during a Melbourne Census. Thanks to Ken and Corrine for perservering! Chris’ photo of a very unusual looking Eubranchus species has been recorded as Eubranchus cf. mandapamensis. The closest known species to what Chris found is actually a tropical slug originally described from Mandapam in south-eastern India. It has only been recorded once before in southern Australia, on the Yorke Peninsula (SA) in 2012. This may be an example of a species “on the move” due to warming waters. Please keep an eye out for it and be sure to send photos to ReefWatch! 
Chris managed to pip all-time record holder Rebecca at the post, with 35 to her 33 this time. This friendly competition only ups the number of species we record each Census, so keep it going!

Thanks again to everyone who contributed photos, keep up the great work. We can’t wait to share the results and prize winners for March with you shortly, and look forward to seeing what slugs are out and about during our Winter Wonderland Census in July!

250 photos were submitted to the Census for March, and with everything going on we had to rely on snail mail to get them through to our expert Bob Burn for identification and judging. We’re currently working through the report now- watch this space.

Smoke from the recent bushfires had severely impacted much of the Victorian coast this weekend, but around 100 intrepid nudi hunters made the best of conditions and submitted over 200 photos to the Census. We still recorded 72 species of sea slugs! And the quality of photos made Bob Burn’s judging of the competition a tricky task. Thanks to everyone who submitted to our first true summer edition of the Census.

What can we say other than we were blown away by the number of nudis spotted this time! 88 species to be exact, some new additions to our records and a few entries that left our experts pleasantly surprised. October certainly seems like a busy time for both our nudis and the keen citizen scientists who search for them!

Our winter wonderland edition of the Melbourne Sea Slug Census saw many people brave the cold water, but only 6 groups of nudi hunters managed to photograph slugs during that time. Still, 29 species of slug were sighted, with some really beautiful submissions and new species to add to the Melbourne census records. A commendable effort for a very chilly weekend!

Melbourne Sea Slug Census III was held over the 15-18 March. Many groups reported seeing far less slugs than expected, but all in all, over 100 nudi hunters that were out and about across the weekend recorded 48 individual species between them. Well done everyone!

The second Melbourne Sea Slug Census took place on the 12-15 October. Over four days, enthusiastic teams and individuals managed to find an incredible 75 species of sea slugs! It was a fantastic effort and the overall quality of images submitted impressed everyone involved in sorting and identification. Some of the species photographed during this Census have rarely been seen in Victoria, even by our leading experts!

The first Melbourne Sea Slug Census was held on the on the weekend of 21-22 April. Thank you to the over 150 people who photographed different sea slugs (nudibranchs) in Port Phillip Bay, Western Port Bay and surrounds and submitted them to ReefWatch. Together, we found a total of 53 species of nudibranch!