Republished from The Conversation |

Australia has failed Greater Gliders: since they were listed as ‘vulnerable’ we’ve destroyed more of their habitat

In just five years, Greater Gliders — fluffy-eared, tree-dwelling marsupials — could go from vulnerable to endangered, because Australia’s environmental laws have failed to protect them and other threatened native species.

Our new research found that after the Greater Glider was listed as vulnerable to extinction under national environment law in 2016, habitat destruction actually increased in some states, driving the species closer to the brink. Now, they meet the criteria to be listed as endangered.

Despite this, the federal government has put forward a bill that would further weaken Australia’s environment laws.

If Australia wants to ditch its shameful reputation as a global extinction leader, our environmental laws must be significantly strengthened, not weakened.

Why is the Greater Glider losing its home?

At about the size of a cat, Greater Gliders are the largest gliding marsupial in the world, and can glide up to 100 metres through the forest canopy. They nest in the hollows of big old trees and, just like koalas, they mostly eat eucalypt leaves.

Greater Gliders were once common throughout the forests of Queensland, New South Wales, and Victoria. However, destructive practices, such as logging and urban development, have cut down the trees they call home. The rapidly warming climate and increasingly frequent and severe bushfires are also a major threat.

Together, these threats are causing the Greater Glider to rapidly disappear.

In Victoria, we measured the amount of habitat that was logged.

State-owned forestry company VicForests is responsible for the lion’s share of native forest logging in Victoria. The Conversation contacted VicForests to respond to the arguments in this article. A spokesperson said:

“There are 3.7 million hectares of potential Greater Glider habitat in Victoria under the official habitat model. The most valuable areas of this habitat are set aside in conservation reserves that can never be harvested.

“The total area harvested by VicForests in any year is around 0.04% of this total potential habitat.” 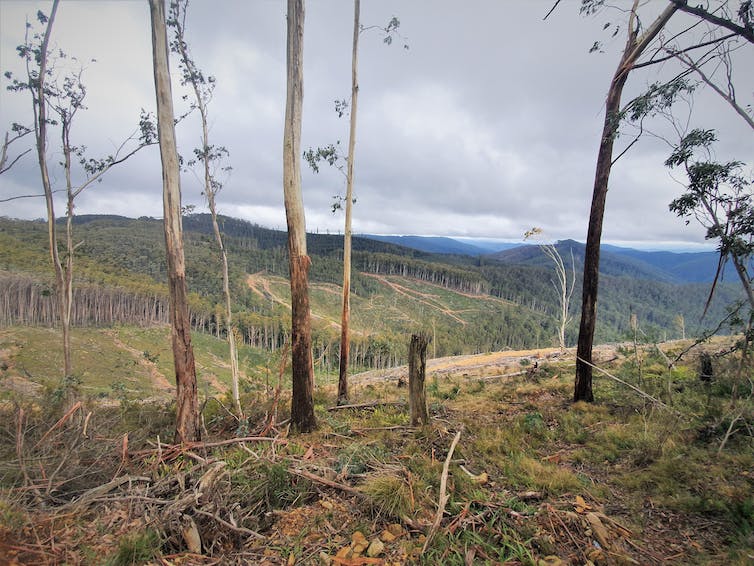 We also quantified how much Greater Glider habitat was affected by the 2019-2020 Black Summer bushfires, and found approximately 29% of greater glider habitat was burnt. Almost 40% of this burnt at high severity, which means few gliders are likely to persist in, or rapidly return to, these areas.

As a result, earlier this year — just five years after listing — an assessment by the Threatened Species Scientific Committee found the greater glider is potentially eligible for up-listing from vulnerable to endangered.

Why was habitat allowed to be cleared?

Development projects can take decades to be implemented after they’ve been approved under the EPBC Act. Once a project is approved, it is not reassessed, even if a species becomes vulnerable and a wildfire burns much of its habitat.

This means the impact of clearing native vegetation can be far greater than when initially approved. It also means it can take many years after a species is listed until its habitat is finally safe.

In Victoria and parts of NSW, the forestry industry is allowed to log greater glider habitat under “regional forest agreements”. These agreements allow logging to operate under a special set of rules that bypasses federal environmental scrutiny under the EPBC Act.

The logging industry is required to comply only with state regulations for threatened species protection, which are are often inadequate.

In 2019, the Victorian government updated the protection measures for Greater Gliders in logged forests. However, these still allow logging of up to 60% of a forested area authorised for harvest, even when greater gliders are present at high densities.

The spokesperson for VicForests said the company prioritises live, hollow-bearing trees wherever there are five or more greater gliders per spotlight kilometre (a 1 kilometre stretch of forest surveyed with torches). But this level of protection is limited and is unlikely to halt greater glider decline, as the species is highly sensitive to disturbance.

Despite this, earlier this year, the Federal Court upheld an appeal by VicForests to retain their exemption from the EPBC Act. This ruling means VicForests will not be held accountable for destroying threatened species habitat, even when it is found in breach of state requirements.

“VicForests operations are subject to Victorian laws, and enforced by the Office of the Conservation Regulator (OCR) and Victorian courts when necessary. The recent federal court appeal decision has not changed that fact.”

They add that VicForests surveys show greater gliders continue to persist in recently harvested areas, under its current practices.

“VicForests has not seen any evidence that even a single Greater Glider has died as a result of our new harvesting approach.”

The government isn’t learning its lesson

The EPBC Act is currently undergoing a once in a decade assessment that considers how well it’s operating, with a recent independent review criticising the EPBC Act for no longer being fit for purpose. Our new research reinforces this, by showing the act has failed to protect one of Australia’s most iconic and unique animals.

And yet, the federal government wants to weaken the act further by implementing a streamlined model, which would rely on state governments to approve actions that would impact threatened species.

There’s a raft of reasons why this would be problematic

For one, state environmental laws operate independently, and don’t consider what developments have been approved in other states. Cutting down trees may seem insignificant in certain areas, but without considering the broader impacts, many small losses can accumulate into massive declines, like a death by a thousand cuts.

As a case in point, despite the devastation of greater glider habitat from the Black Summer fires in NSW, the Queensland government have recently approved a new coal mine, which will destroy over 5,500 hectares of Greater Glider and Koala habitat.

What needs to change?

The Greater Glider is edging towards extinction, but there is still no recovery plan for this iconic marsupial. Adding to this, new research suggests there are actually three species of Greater Glider we could be losing, rather than just one as was previously thought. Significant effort must be invested to create a clear plan for their recovery.

Because Australia has such a rich diversity of wildlife, we have a great responsibility to protect it. Australia must make important changes now to strengthen — not weaken — its environmental laws, before Greater Gliders, and many other species, are gone forever.

This article is republished from The Conversation under a Creative Commons license. Read the original article.